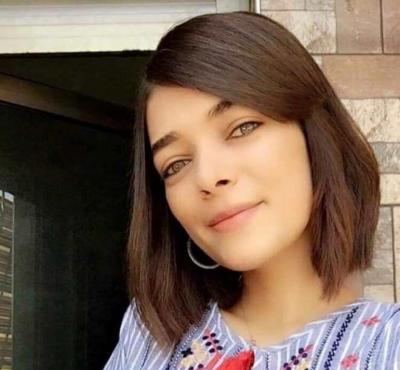 On Monday, 29 August 2020, the Israeli Occupation Forces, accompanied by military dogs, broke into the house of Mais Abu Ghosh at dawn. The soldiers ordered her father to wake up his wife and children and gather them in the living room. Mais was held in a separate room and ordered to open her laptop and mobile, which she refused. She was permitted to change her clothes in the presence of female soldiers. The Israeli Occupation Soldiers searched her room as well as her parents' room vandalising both rooms and turning them upside down. The soldiers tightly handcuffed Mais's hands behind her back with plastic shackles, which caused her pain. On foot, Abu Ghosh was transferred from her home to the entrance of Qalandia Refugee Camp. Halfway to the entrance, she was blindfolded, and a military jeep transferred her from the camp to Qalandia military checkpoint, then the soldiers violently forced her out of the jeep into a room. Abu Ghosh was cursed and degraded by male and female soldiers before being transferred. The detainee was also exposed to an attempt of a bare body search. Upon her outright refusal, she was threatened to be searched by force and to be 'raped'. Abu Ghosh then was transferred to Al Moscobiyeh Prison, where she was physically and mentally tortured for over a month.

At Al Moscobiyeh Interrogation Centre, Abu Ghosh was thrown into a small airless cell without a mattress, so she had to sleep on the floor. After an exhaustive body search, she was moved to the interrogation room. The interrogators shackled her hands and legs to an interrogation chair to start an interrogation that lasted for long hours without sleep or rest. She was threatened with arrests of her family members, in addition to being expelled from the university and demolishing her home again.[1]

Her personal information from her phone and social media accounts were used to threaten and pressure her. She was also subject to a lie detector for several times. The IOF also arrested her younger brother Suleiman and brought him to her interrogation for further pressure. In the same vein, they summoned her father and mother to the interrogation, in an effort to exert additional pressure on her. The interrogators threatened her to use military interrogation unless she would confess what they want her to. Later, Abu Ghosh was moved to the military interrogation chamber where she was subject to brutal physical torture for three days at a stretch. During the interrogation, she was further threatened to go back home either paralysed or mentally incapable.

Blindfolded, Abu Ghosh was subject to continuous severe slapping and various stress positions. For example, she was forced into the 'banana' position, where a female interrogator forced her, un-handcuffed, to sit on a stool with her back bent backwards in a banana shape while another female interrogator is holding Mais's head to maximise the pressure on her abdominal muscles. Every time she dropped her head, the interrogator would lift it back up, and threaten to slap her if she would fall again. This position, however, caused Mais to fall to the ground several times.

Furthermore, she was subject to a Shabah stress position where female interrogators forced her, blindfolded, to squat against a wall, pressuring her shoulders to squat. Every time she fell, they would violently pull her up leaving marks on her body. Abu Ghosh was also forced to squat without leaning to a wall by pressuring her shoulders to stay in such a position for an extended period. Although she lost her conscious and fell to the floor, the interrogator forced her to the same position again. Besides, the detainee was subject to the table stress position. She was handcuffed behind her back with her hands positioned on a table behind her that is higher than her shoulders. To exacerbate the suffering, the interrogators used to pull her hands to the back for a long time.

These positions were repeated over the duration of three-day interrogation. Being tightly cuffed with irons shackles, Mais's hands and legs badly bled. The interrogators deliberately made Abu Ghosh hear the cries, howls, and groans of other under-interrogation detainees while she was at her cell. This technique was used for two nights to pressure her, further.

Abu Ghosh is still suffering pain in different parts of her body, especially her back, feet, and head due to the torture she endured. She also faces medical negligence, given that the IOF have not taken any serious measures to diagnose and treat her.

For 25 days from the first moment of her arrest, Abu Ghosh was denied her right to consult with her lawyer as a result of seven consecutive ban orders. The orders constituted an obstacle to the defence lawyer to monitor and document the torture Mais was subject to during the interrogation. The lawyers of Addameer Prisoner Support and Human Rights Association filed two petitions to the Israeli High Court against the ban orders, but they were overruled. The lawyers also made several appeals against the extension of Mais's detention from her arrest up until the end of the interrogation. Notwithstanding, the appeals were also dismissed under the pretext of further interrogation.

At one of the detention extension hearings, which was held without the defence lawyer, Abu Ghosh informed the military judge of the harsh interrogation conditions as well as the torture she endured. However, the lawyer was shocked that this part of Abu Ghosh's statement was erased from the hearing's protocol. The judge, moreover, approved the extension of her detention. At the appeal hearing of the extension, the military judge claimed that the intelligence service had the right to keep the statement of the detainee confidential for security purposes. Nonetheless, this request together with the judge's decision on this request should have been recorded in the hearing’s protocol.

The concealment of Abu Ghosh's statement about the torment coupled with the infringement of her right to consult with her lawyer unmasks the Israeli intelligence's attempts to obliterate the torture crime committed against her as well as the endeavours to prevent her lawyer from monitoring and documenting such violations.

On Thursday, 24 October 2019, the Israeli occupation authorities issued an indictment against Abu Ghosh for her student activities and membership of the Democratic Progressive Student Pole, a banned student bloc per the Israeli military orders. In addition, the indictment charged her with "communicating with an enemy", participating in a conference on the Palestinian right of return and writing content for an allegedly Hezbollah-affiliated news agency.

Abu Ghosh's trial lasted for over eight months, in which on 3 May 2020, she was sentenced with 16-month imprisonment and a fine of NIS 2,000. In the verdict, the military judge acknowledged the serious difficulty in establishing the sentence based on the conditions of the interrogation with Abu Ghosh, referring to the torture, to which she was subject and its legal implications for evidence. The judge also argued that although the core of the activities, over which Abu Ghosh is charged, is of civilian nature, such acts, nonetheless, should not be tolerated, for they cement the status of banned factions in the society. Notwithstanding their civility, these activities also reinforce the military activities that eventually threaten the security, the judge also claimed. Such an allegation sheds light on the Israeli occupation's effort to oppress the Palestinian people by criminalising basic human rights such as the rights to participation in political life and freedom of association. The Israeli military courts use its orders to connect armed resistance with political participation and union activism. This showcases the Israeli occupation authorities' policy to control the Palestinian people by banning Palestinian political parties and their affiliated student blocs contrary to relevant international treaties and conventions.

The Criminalisation of Fundamental Rights

Since 1967, the Israeli occupation authorities subject the Palestinians to various military orders including their amendments; this comes in clear violation of international humanitarian law and international human rights law. Especially, the Fourth Geneva Convention, which although it allows the Occupying Power to issue and implement legislation on the occupied territory, however, it requires that the latter complies with the laws and the judiciary system already in force in the occupied territory. Notwithstanding, the Occupying Power may subject the population of the occupied territory to new provisions of law, where such laws are essential to enable the Occupying Power to fulfil its obligations towards the civilian population and in their best interest according to international humanitarian law (IHL).

In this context, the military prosecution charged Abu Ghosh over acts related to her student union activities at the university in addition to her media action. Such a practice demonstrates the occupation authorities' criminalisation of fundamental human rights through military orders. The Israeli occupation authorities not only violate international law by criminalising such rights but also provide impunity for the severe torture Abu Ghosh suffered during the interrogation in blatant breach of the Convention against Torture and Other Cruel, Inhuman or Degrading Treatment or Punishment, which prohibits all forms of torture and cruel treatment.

In the case of Abu Ghosh, the violations of the Israeli occupation authorities went beyond torture to infringement of her right to a fair trial. As the law stipulates, the detainee shall be entitled to a fair trial. This right has been violated by the Israeli occupation authorities to cover up the torture crime committed against Abu Ghosh. The military prosecution accepted a lesser sentence (16 months) compared to the rulings in similar cases after the prosecution acknowledged that it was difficult to take into account the evidence presented in its testimony as well as other detainees' because it was taken under torture.

The crime of torture that was committed against Abu Ghosh during the interrogation warrants that the occupation be pursued and held accountable. The physical and mental torture inflicted upon her was used as punishment for exercising guaranteed basic rights. The very entitlements the Israeli occupation authorities seek to restrict to oppress the Palestinian people.

A family in the face of occupation

Mais's family, originally from the forcibly-depopulated village of Imwas, takes shelter in Qalandia Palestinian Refugee Camp north of the Israeli-occupied al-Quds (Jerusalem). Abu Ghosh's family consists of five brothers and two sisters. On 25 January 2016, Mais lost her brother Hussein, who was murdered by the IOF for allegedly carrying out a stabbing attack in the colony of Beit Horon, forcibly erected on lands of the village of Beit Awar al-Fawqa. Ever since, the family has been subject to various forms of constraints and collective punishment by the Israeli occupation authorities. The body of Hussein was held for four days before being returned to his family for proper burial. Moreover, the IOF demolished the family's home two months after the execution of their son. This act was followed by an order to prevent the reconstruction of the house. By the same vindictive token, the IOF arrested Suleiman, Mais's brother, before the anniversary of Hussein's martyrdom. He was re-arrested four months after his first release on 9 May 2019. Hussein was held in administrative detention for four months before he was released. His arrest was used to bring pressure to bear upon Mais, who was subject to harsh interrogation at the Al Moscobiyeh Interrogation Centre.

The hard-outlived experience of the Abu Ghosh family represents the collective suffering of Palestinian families under occupation, including but not limited to the refuge, detention, killing, and home demolition.

[1] Four years ago, the IOF demolished the family house of Palestinian detainee Mais Abu Ghosh after being charged with a military operation.