"The provision of health care for prisoners is a State responsibility. Prisoners should enjoy the same standards of health care that are available in the community, and should have access to necessary health-care services free of charge without discrimination on the grounds of their legal status." -Rule 24 of Standard Minimum Rules for the Treatment of Prisoners in May 2015 (Mandela Rules).

The increase in the number of sick cases may be attributed to a number of factors. Firstly, there is a policy of medical neglect and the continuation of the forces of the prison service in denying their responsibility in providing appropriate health care, and periodic medical checkups for prisoners and detainees. Secondly, the environment of the prison plays a role. The majority of the prisons are old and are not in line with international standards in terms of size and architecture; insects and rodents are all over the place and the climate is harsh. Prisons in the south have a desert atmosphere, while those in the north are highly humid. Thirdly, administrations of prisons neglect their responsibility towards the needs of personal and public hygiene, and taking the measures to ensure the health of the prisoners and detainees. Fourthly, health is impacted by overcrowding due to the increase in the number of prisoners and detainees in 2014.

Article 76 of the Fourth Geneva Convention states that prisoners and detainees should enjoy conditions of food and hygiene sufficient to maintaining good health, which should be “at least equal to those obtaining in prisons in the occupied country.”  It also states that shall receive the medical attention required by their state of health, and that they shall have the right to receive at least one relief parcel monthly. Article 85 also emphasizes that the detaining power is bound to take all necessary and possible measures to ensure that protected persons shall, from the outset of their internment, be accommodated in buildings or quarters which afford every possible safeguard from humidity, and with sufficient warmth and lighting, in addition to having sufficient sleeping space and ventilation.

Regarding medical attention and inspections, articles 91 and 92 of the Fourth Geneva Convention emphasize that every place of internment shall have an adequate infirmary, under the direction of a qualified doctor, where detainees may have the attention they require, in addition to medical inspections of internees shall be made at least once a month, whose purpose is to supervise the general state of health, nutrition of internees, and to detect contagious diseases.

THE ISSUE OF DUAL LOYALTY

Doctors and other medical staff employed by the IPS find themselves in a situation of “dual loyalty”, whereby their primary obligation is towards the State and the Israeli security apparatus, rather than the patient. Doctors working in detention and interrogation centers often fail to report incidents of torture and ill-treatment to the relevant legal authorities for fear of losing their jobs. Similarly, physical signs of torture and abuse are rarely reported in the detainee’s medical files making it almost impossible for the victims to seek justice and compensation. Doctors also often advise Israeli Security Agency officers on the health condition of a detainee held under interrogation and as such, they become complicit in the practice of torture and physical and mental abuse.

HaSharon Prison: Prisoner Lina Al-Jarbouni emphasized that Palestinian prisoners in HaSharon prison live under difficult conditions that do not take into account their physical and medical needs, in addition to being subjected to physical assaults and psychological pressure. She added that “there are five female prisoners who suffer from different diseases like hypertension, diabetes, inflammations, and ulcers, and therefore, require special healthcare. The prison services also refuse to let volunteer doctors to enter the prison, and refuse to allow female prisoners from purchasing shoes from outside, which forces them to buy very pricey shoes from the canteen.”

Hadarim Prison: Prisoner Ammar Mardi revealed the presence of 35 patients who require urgent surgeries in Hadarim prison, like prisoner Musalamah Thabet, who suffers from three types of spinal osteoarthritis. Prisoner Iyad Abu Nasser suffers from problems in the liver and spleen, as well as blood problems. Despite these revelations, the forces of the prison service decided to return him to Hadarim prison from the clinic of Ramleh prison. Ammar Mardi added that many of the sick prisoners follow a special diet that is not provided by the administration of the prison, and hence they buy it out of their own money.

Nafha Prison: The attorney of Addameer conveyed the statements of prisoner Ala’ Abu Jazar, who confirmed that in each of the 7 sections of Nafha prison, there are at least 20 medical cases. Some of the prisoners require medical follow-up and periodic testing, while other need urgent surgeries. He considered that medical neglect tops the priorities of the prisoners in Nafha prison, adding that the administration delays allowing the entry of an external dentist to treat the cases. He was allowed to enter only once, and thereafter it seemed that the administration of the prison backed down on the agreement. Abu Jazar clarified that the transfer of a prisoner or detainee for treatment in the hospital requires 60-72 hours, while the road from Nafha prison to Beersheba hospital in a regular transport requires 40-50 minutes, but that the forces of the prison service procrastinate the transfer in both directions by passing by a number of prisons and detention centers on the way to the hospital. Abu Jazzar considered the practices of the occupation to be within a systematic policy of humiliation that seeks to subjugate prisoners. The prisoner or detainee is forced to sit on an iron chair with his hands and legs handcuffed, and he is not allowed to use the bathroom and is not given food or drink during transportation, which drives many to waiver their right to medical care in hospitals. When the patient arrives to the hospital, the members of security of “Al-Nahshon” unit refuse to remove the handcuffs and allow the medical team to provide treatment and run necessary tests. Visits to the hospital require follow-up, x-rays, and medical tests, and those needing treatments require follow-up visits. However, due to these humiliating and exhausting practices, approximately 50% of the sick prisoners waive their right to medical treatment.

Ramon Prison: According to prisoner Ammar Abdullah Sadeq Zwaid, no improvement took place on the living conditions of prisoners since the 2012 strike, in terms of food, education, and transfers. This is an evasion of the 14 May 2012 deal that was to improve the livelihoods of prisoners, including attainment of lifestyle needs, as well as improvement of healthcare. No substantial improvement was witnessed, and changes occurred only on the formal level, such that the administration of the prison interacts more quickly with the request of the detainee or prisoner to go to the clinic of the prison. However, all other procedures remained the same and require the same amount of time, in addition to that chronic problems are predominantly not treated. The number of sick prisoners is on the rise, and findings indicate the presence of 20-30 patients in each section, 10 of which (in every section) require surgeries.

Megiddo Prison: Prisoner Bilal Zayed said that the number of medical cases in Megiddo prison that require immediate and serious care exceeds 300 cases. Also, hundreds of the detainees that arrive in the prison after the end of interrogation with them suffer from depression, introversion, and lack of self-esteem due to the harsh interrogation methods that involve psychological torture, physical torture, solitary confinement, degrading treatment, and verbal abuse. Tens of prisoners suffer from chronic illness, such as strokes, heart disease generally, neurological diseases, and cancer. The administration of the prison also prevents the entry of winter clothes for prisoners during the winter season. There is a large shortage in winter blankets and covers, and prisoners and detainees suffer from cold all the winter season. The administration does not supply the rooms with heaters in the winter.

Gilboa Prison: Prisoner Amir Makhoul  stated that the administration of Gilboa prison follows the policy of medical neglect against ill prisoners and detainees, whose number is estimated at 70 prisoners. They suffer from hypertension and diabetes, and 15 of them are on regular medication. For example, the administration of the prison did not allow the orthopedic doctor to enter the prison for eight months, while he is supposed to be allowed entry every three months.

HaSharon Prison: The prisoners in HaSharon prison indicated the presence of a child, Mohammad Khalil, who is wounded in his right leg. He was lying in the clinic of Ramleh prison before coming to the prison, and needs a surgery to remove the platinum from his leg.

Shatta Prison: Prisoner Naser Sadakah said that out of the total 120 prisoners in Shatta prison, 10 prisoners have chronic illnesses that require immediate attention and medication; the administration procrastinates and ignores their need for treatment.

Eighteen-year-old Muhammad talks about his case of appendicitis in Ofer prison:
I was arrested on 25 February 2009 from Katana after clashes erupted around the Wall in the village. A group of four undercover forces arrested me and started beating me. Then the [Israeli] army came; they took me and transferred me to the police station in Atarot. There again, two border police beat me on my legs, head and stomach using their rifles. They were beating me in a room called the “container”, after which they took me to Atarot. It was in the evening at the time of the Maghreb prayer. I was left there until 4 a.m., after which I was transferred to Ofer prison. There, I was immediately placed in section 11, room number 4, especially used for detaining juveniles. I was held there for two months; then they transferred me to the tents where I stayed another two months. I was sentenced to four and a half months of prison and a 500 shekel fine. Although I was supposed to be released on 25 June 2009, there was a delay and I was released only on 2 July 2009. A week before 25 June, I started feeling pain in both sides of my stomach. It started hurting more and more, so the officer of the section called the nurse who was on duty that day. He came with a urine container and took a sample. Then, he asked that I go the clinic and the next day I was allowed to go. A doctor was there who performed a routine examination to check the pressure on the both sides of my waist. Then she told me: “drink more water” and gave me an envelope filled with blue pills the size of lentils. And they brought me back to the section. Every time I would feel the pain I would take one of the pills. At first, they were working for 10 hours. Then, they stopped. When I went back to the clinic, I was told that I am dehydrated. This was the case until my release on 2 July 2009. I took two pills before I was released on a Thursday. They worked until Saturday noon. Then I felt a sharp pain and immediately went to the doctor in the village clinic. From there I was immediately transferred to the hospital in Ramallah and then to the operating room. After a few X-rays and tests, the doctors performed surgery which lasted an hour and a half. It turned out that my appendix had burst and an infection spread throughout my abdomen. I had to stay in the hospital for 16 days. 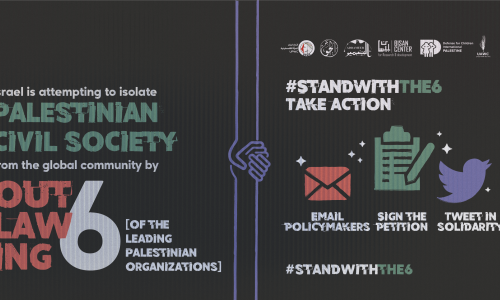