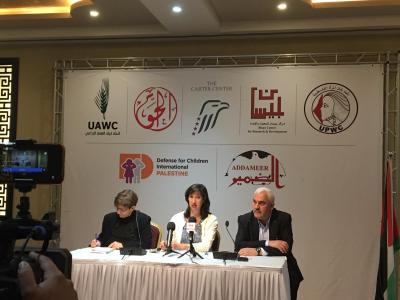 The Six prominent Palestinian civil society and human rights organizations welcomed the meeting organized by the Carter Center in Ramallah today, and emphasized on its importance to show solidarity and support to civil society and human rights in Palestine. Panelists during the press conference included Ms. Paige Alexander, Chief Executive Officer of the Carter Center, Advocate Sahar Francis, the General Director of Addameer Prisoner Support and Human Rights Association, and Mr. Shawan Jabarin, the General Director of Al-Haq. Ms. Alexander highlighted the importance of civil society for the protection of human rights and stressed that Israel's acts such as the designation makes it harder for civil society to carry out their vital work, and called on the International community to continue to pressure Israel to rescind the designation against the six Palestinian organizations.

Our joint statement distributed during the press conference reads as follows:

Over five months have passed since the Israeli occupation’s blanket criminalization of six leading Palestinian human rights and civil society organizations (CSOs) in a military order published on 3 November 2021, two weeks after their arbitrary designation by Israel’s “Defense” Minister as “terror organizations” on 19 October 2021. This unprecedented and sinister move has been widely denounced by international human rights organizations and UN bodies as a “frontal attack on the Palestinian human rights movement, and on human rights everywhere.” State parties, including the EU, have similarly denounced the move, though in regrettably weaker terms without concrete action.

The blanket criminalization represents an unprecedented escalation of decades of the Israeli occupation’s systematic harassment campaigns against the Palestinian CSOs and another step in the formalizing annexation of the West Bank through the application of Israeli law on Palestinian Organizations and entrenching the Israeli control over Palestinian Society through the reengineering of Palestinian Civic Space. The imminent consequences of the latest move are especially grave, allowing Israeli occupation authorities to raid the organizations’ offices, seize all assets, arbitrarily arrest staff, and prohibit funding, and/or even public support, for their activities.

Since then, our organizations, represented by Adalah Legal Center and the offices of Attorney Michael Sfard and Attorney Jawad Boulous, have undertaken formal procedures challenging the evidentiary basis of the military order. On 16 November 2021, our legal team sent a letter to Israeli security authorities demanding they reveal the entirety of the evidence forming the basis of the designations, to which the Israeli Military Attorney responded, on 2 January 2021, that “the core of the declarations is based on classified…information that cannot be disclosed.” Thereafter, we filed a procedural objection against the military order, noting the illegality of the declarations, the absence of due process, and the lack of an evidentiary basis for the declaration.

The consequential negative impact of these designations has been acutely felt by our organizations. Most importantly, they’ve hampered the critical services we provide to those most marginalized and at-risk in Palestinian communities including women, children, agricultural workers, and political prisoners. Notwithstanding, the weak responses and recent actions of State parties and intergovernmental organizations (IGOs) that prominently claim to be supportive of democratic principles and human rights only exacerbate the acute damaging consequences.

Three recent cases are worth noting: (1) the Dutch government's decision on 5 January 2022 to end its funding for the Union of Agricultural Work Committees (UAWC); (2) the European Commission’s extended and arbitrary funding suspension of one of Al-Haq’s and one of UAWC’s projects funded by the European Union (EU); and (3) an Israeli military judge at Ofer military court in the occupied West Bank sentenced the President of the Union of Palestinian Women’s Committees, Khitam Sa’afin, to 16 months imprisonment after nearly 15 months of arbitrary detention.

The practice of withholding alleged “secret evidence” remains the modus operandi of the Israeli occupation and apartheid regime. The latest designations, however, mark a gross expansion of the practice in an attempt to cripple any independent functioning Palestinian civil society. The Israeli occupation’s criminalization of the six Palestinian organizations is explicitly intended to have secondary and tertiary consequences for the capacity of the human rights and civil society organizations to continue their vital work, especially their work in holding Israel accountable for its crimes and international law violations committed against the Palestinian people.

It is regrettable that States, IGOs, and other actors have failed to move beyond verbal denunciations of Israeli authorities’ criminalization of Palestinian civil society; it is unacceptable that they instead take on decisions that compound upon the persecution of the six Palestinian organizations, without taking any concrete actions to hold the Israeli occupation and apartheid regime accountable.

As such, we call on States, especially the US and Intergovernmental Organizations, and the European States claiming to support the global protection of human rights to:

Further, we call on individuals of consciousness from around the world to call attention to this blanket attack on Palestinian civil society and human rights and to immediately and urgently contact their elected officials and insist they hold Israeli authorities accountable and protect human rights in Palestine.

Watch the recording of the press conference here.