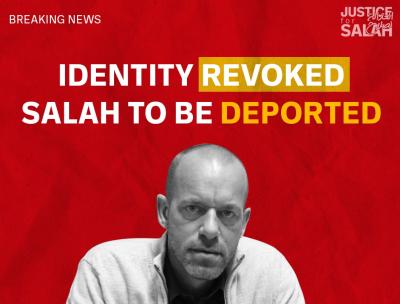 Imprisoned Palestinian-French human rights lawyer, Salah Hammouri, has been informed that he will be forcibly deported in three days' time for "breach of allegiance" to Israel, following the revocation of his Jerusalem ID. Salah’s deportation will be a definitive step in Israel’s prolonged harassment and targeting of him and his work through arbitrary arrests, travel bans, surveillance spyware, and family separation.

Yesterday, 30 November, human rights lawyer Salah Hammouri was verbally notified by the Israeli Prison Services (IPS) that he was due to attend a deportation hearing the next day in front of the Population, Immigration and Border Authority. The hearing would confirm whether he would be forcibly removed from Jerusalem, his hometown. Salah was informed from within Haradim prison, where he has been detained since July 2022 under an administrative detention order, without actual charge or trial, based on "secret evidence." The order is due to terminate on 4 December, upon which Salah can be released, re-detained under renewal of the order, or forcibly deported to France. Earlier yesterday, Israeli Minister of Interior, Ayelet Shaked, re-affirmed her decision to revoke Salah’s residency and signed off his deportation with the Israeli Minster of Justice, Gideon Sa’ar’s approval and following recommendations from the Israeli Security Agency. This decision was initially taken on 17 October 2021 and subsequently appealed by Salah's legal counsel in a public hearing on 14 September 2022.

On 7 March 2018, pursuant to the Entry into Israel Law of 1952 and Amendment No.30 to the Citizenship and Entry into Israel Law, the Israeli Minister of Interior was granted broad discretion to revoke Palestinians’ residency status as a punitive measure, escalating the threats of forcible transfer of indigenous Palestinians from Jerusalem.[1] According to the Law, as amended, “breach of allegiance” is defined as committing, participating in, or incitement to commit a terrorist act or belonging to a terrorist organization, as well as committing acts of treason or aggravated espionage. Justified on the vague and illegal grounds of “breach of allegiance” to the State of Israel, the practice of punitive residency revocation, which amounts to unlawful collective punishment, is based solely on the Israeli Interior Ministers’ interpretations that the resident “has committed an act which is considered a breach of loyalty to the State of Israel.”[2]

The Minister of Interior first notified Salah of her intention to revoke his residency on 3 September 2020 and later officially confirmed the decision on 17 October 2021, a decision that Salah's legal counsel has fought to appeal. On 3 February 2022, Salah's defense counsel submitted two petitions to the Israeli Interior Ministry and Attorney General, petitioning for a suspension of the implementation of the Interior Minister's residency revocation recommendation until a final ruling was issued by the Israeli High Court. The Israeli Attorney General recommended that the appeal be rejected based on "secret information" provided by the Israeli Interior Ministry. In March, the High Court adopted the Attorney General's recommendation and rejected Salah's appeal. Salah's legal counsel appealed this decision in front of the Israeli Supreme Court. The Supreme Court ruled in favor of the Minister of Interior and Attorney General on 29 November 2022, and the appeal was refused, permitting the progression of Salah's residency revocation and his potential deportation.

There has been repeated disinformation shared by the Israeli occupation authorities, hindering the ability to understand their intentions genuinely regarding the case of Salah Hammouri and deliberately sending contradictory messages. According to Salah’s father, Mr. Hassan Hammouri he was summoned earlier in the day on 30 November to a police station in Jerusalem and informed that his son would be released on 4 December, just a few hours before Salah was informed of his deportation hearing. The Israeli occupation authorities demanded that Mr. Hassan sign a pledge, committing not to celebrate Salah's freedom publicly, which he refused. Shortly after explaining that his son should be released to Jerusalem, Mr. Hassan noted that their statement changed, suggesting that Salah may be released to Jerusalem, the West Bank, or France, the latter inevitably by deportation.

Embedded in Israel’s regime of racial domination and oppression, residency policies are designed to maintain a precarious legal status for Palestinians in East Jerusalem and to uphold an Israeli-Jewish demographic majority in the city. In violation of international law, Israel’s demographic goals remain integral to its overarching plan for Jerusalem, consistent with a decades-long effort to alter the city's character, legal status, and demographic composition. Salah's case thus establishes a dangerous precedent for the Israeli occupation's escalation of residency revocation and arbitrary administrative detention. In light of the above, we call on the international community to immediately intervene to:

[2] Entry into Israel Law (Amendment No. 30) of 2018, available in English (unofficial translation) at: http://www.alhaq.org/cached_uploads/download/alhaq_files//images/thumbnails/images/stories/Images/1201.pdf