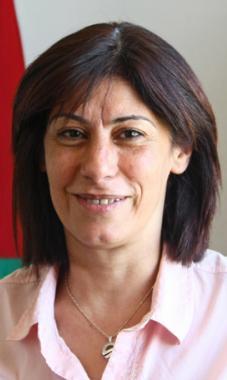 Khalida Jarrar was arrested again on 31 October 2019, eight months after her release from a 20-month long administrative detention. The Israeli Occupying Forces stormed her house in Al-Bireh at 9am, taking her to Ofer military base where she was searched and interrogated. She was accused of being a member and holding a position in a “terrorist organization” according to the Israeli occupation. After interrogation, she was taken by the Bosta to Hasharon prison in difficult conditions, spending three days there before being transferred again to the Mascobiyah interrogation center. At Mascobiyah, she faced further interrogation on the same allegations. During interrogation, she heard voices of people screaming, and went through several interrogation sessions in Mascobiyah before being transferred to Hasharon prison, then Damon prison, where she is now held.

On 27 November 2019, the Israeli occupation submitted an indictment against Khalida that included charges of assuming a position with the Popular Front for the Liberation of Palestine, which is banned under Israeli military orders.

The present allegation was also previously used against her in 2015, when she was held in prison for 15 months, and then administratively detained, again, in 2017 for a period of 20 months. All such detentions and arrests constitute a flagrant violation of international law and contradicts the internationally established legal principle and prohibition of trying a person for the same act twice.

Moreover, recently on 1 March 2021, Ofer military court issued its verdict against Legislative Council Member Khalida Jarrar, of imprisonment for 24 months, with an additional 12 months suspended for a period of five years from the day of her release, coupled with a fine of 4000 shekels.

The ruling came after the military prosecution amended the indictment to categorically state that Jarrar’s activity was limited only to her political role and work related to the Palestinian National Authority, confirming that she had no ties to any military, organizational or financial work. This comes despite the lies spread by the occupation authorities and media that Jarrar’s arrest was a result of her responsibility in a military operation in Ain Boubin in August 2019.

The military prosecution acknowledged that these amendments to the charges came due to the difficulty of exhausting the procedures in the file, referring to the circumstances of the interrogation of the central witnesses in the file. Furthermore, it noted the fact that Jarrar was under administrative detention for a long period during the period specified in the indictment.

The decision of the military court further points to the systematic policy of the occupation authorities in targeting Palestinian political leaders to prevent any political action against the occupation. The military judiciary is used in this sense to impose control and deprive the Palestinian people of their political and civil rights, especially their fundamental right to self-determination.

On 2/7/2017, at approximately 4:00 am, Israeli occupation forces surrounded the house of Palestinian Legislative Council (PLC) member Khalida Jarrar in Al-Ersal neighborhood in Ramallah. The soldiers raided Jarrar’s home, where she lives with her husband Ghassan and her daughter Suha, after destroying the main door. They searched the house and confiscated an iPad, a hard-disk, and her mobile phone.

Later, Jarrar was taken to a detention center in Ofer prison for interrogation. She was only interrogated for 30 minutes before being placed in a small prison cell with no windows for four hours. By 4:00 pm on the same day, Jarrar was transferred to HaSharon prison, one of the two prisons where dozens of Palestinian women are held.

Khalida Jarrar is a Palestinian civil society leader who lives and works in the occupied West Bank in the Palestinian city of Ramallah. She was the director of Addameer Prisoners’ Support and Human Rights Association from 1994 to 2006. Since then, she became a member of the Board of Directors of Addameer until late 2017. In 2006, she was elected as a member of the Palestinian Legislative Council (PLC) and has been the head of the Prisoners Commission of the PLC since then. Jarrar was also appointed to the Palestinian National Committee for the follow-up of the International Criminal Court.

Jarrar's first hearing was held on 5 July 2017 at Ofer Military Court in Ramallah. During the hearing, the judge decided to extend the detention period of Jarrar to six additional days. On 10 July 2017, Jarrar had her second court hearing, where the judge extended her detention for 48 hours in order for the prosecution to look into the possibility of issuing an administrative detention order.

Administrative Detention:
On 12 July 2017, a six-month administrative detention order, signed by the occupation's military commander of the West Bank, was issued against Jarrar. A confirmation hearing was held at Ofer military court on 17 July 2017, without the presence of Ms. Jarrar, who refused to attend the court hearing. The military prosecution claimed that Jarrar's administrative detention is based on secret information related to her alleged affiliation with the Popular Front for the Liberation of Palestine (PFLP). This claim was made without taking into consideration the fact that Ms. Jarrar is an elected Palestinian parliamentarian and a prominent human rights defender, who advocates for the rights of Palestinian political prisoners within Israeli prisons.
Legal Analysis:
In the occupied Palestinian West Bank, the Israeli army is authorized to issue administrative detention orders against Palestinian civilians on the basis of Military Order 1651. This order empowers military commanders to detain an individual for up to six-month renewable periods if they have “reasonable grounds to presume that the security of the area or public security requires the detention.” On or just before the expiry date, the detention order is frequently renewed. This process can be continued indefinitely.
This practice of arbitrary detention is a grave violation of international laws and human rights standards, particularly articles 78 and 72 of the Fourth Geneva Convention which state that an accused individual has the right to defend him/herself. This also violates Article 66 of the Fourth Geneva Convention and the basic standards of fair trial.
Addameer believes Jarrar's detention violates international fair trial standards since administrative detention orders are based on secret information. Therefore, her legal representatives are unable to fully address the prosecution’s argument, which asserts that Jarrar poses a security threat.
PLC member Khalida Jarrar was subjected to many obstacles imposed by the occupation forces, she was released from prison in June 2016 after serving over a year, including one-month under administrative detention. Jarrar has been banned from traveling outside of the occupied Palestinian territory since 1998, except for one occasion in 2010 when she traveled to Jordan for medical treatment after long procedures and diplomatic pressure.
International solidarity with PLC member Khalida Jarrar:
On 16 July 2017, Addameer's attorney visited Jarrar in Hasharon prison, during which Jarrar stated: "The occupying state does not respect the rights of Palestinian parliamentarians, their immunity, their right to be politically active and their right to freedom of expression. It takes arbitrary measures against PLC members that are not only limited to restricted movement and travel bans, but also arbitrary arrest and detention. This is a call for all parliamentarians throughout the world to raise their voices against Israeli violations and injustices, and to call for an end to the policy of administrative detention."
Addameer has been demanding international bodies, human rights organizations and solidarity activists that are concerned with the issue of Palestinian political prisoners and detainees to call for the immediate release of Khalida Jarrar. Addameer also published an online petition calling for the release of female activists Khalida Jarrar and Khitam Saafin.
Health and detention condition:
Jarrar suffers from multiple ischemic infarctions and hypercholesterolemia and she has been admitted to hospitalization due to epistaxis, during which she was treated to stop the continuous bleeding. The transfer between court and prison, “bosta”, is a physically exhausting process. Jarrar reported that the transfer from the prison to the court and back lasts approximately 16 hours in difficult conditions including denial of using the bathroom.
After the new Special Council created by the Israeli Minister for Public Security, Gilad Erdan Khalida and the rest of the female prisoners are suffering from new punitive measures in detention. For example, the cameras in Hasharon prison for women began operating again after being shut off for years following an agreement between the prisoners and the administration in 2011. The female prisoners naturally rejected the imposition of the cameras, and since 6 September have refused to go into the yard for their recreational time. In addition to this, the female prisoners reported that there is a shortage in the provision of food, specifically some kind of vegetables and bread. Also, the quality of the meals has dropped down as they reported receiving some meals uncooked, especially the rice.
Female prisons also reported that medical services are lacking, they complained from the bad behavior of the assigned Doctor at HaSharon, also the only treatment the doctor provides is an advice to prisoners to drink more water. Thus, female prisoners filed a complaint against the Doctor and they are currently waiting on the response. It is worth mentioning that there are 9 injured female prisoners and the number of prisoners who suffer from several other medical conditions.
Family:
Khalida is married to Mr. Ghassan Jarrar, a businessman who has had a long experience in administrative detention, deportation, and interrogation. Khalida has two daughters, Yafa (31 years old) and Suha (27 years old). With the new Erdan Special Council, Khalida could not see her daughter and husband in the September visits and she also could not see her husband in the October visits yet since they had problems of delay in issuing their permits
Last Update
17-03-2021
Previous Arrests
2017- Arrest / Khalida Jarrar