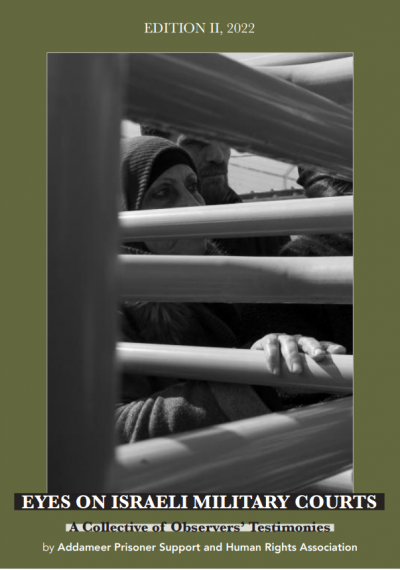 The military courts, Kafka-esque, and kangaroo in nature convict Palestinian detainees in the span of minutes in military trials in securitized trailer ‘chambers,’ overseen by an Israeli military-settler judge and prosecutor. Guilt is predetermined; instead, families attend court sessions with the hope of seeing their loved ones. It is a system wrapped in profound humiliation and degradation, as it aims to impose absolute legal, physical, and psychological control over the Palestinian people.

Between 2017 and 2021, Addameer coordinated 44 visits for 273 individuals representing state diplomats, international NGOs, researchers, students, European Union, and United Nations representatives from Brazil, Ireland, Italy, Palestine, South Africa, Spain, Switzerland, US, and United Kingdom, to observe Israeli military court proceedings. For much of the latter two years, the outbreak of COVID-19 led to the imposition of compounding discriminatory, arbitrary, and oppressive measures, including the prohibition of external visitors, lawyer and family bans, transition to faulty videoconferencing sessions, and the intended further isolation of Palestinian prisoners and detainees.

This booklet of select former visitors’ testimonials aims to push against the increased isolation and consequent greater systemic impunity enjoyed by the Israeli occupation and apartheid regime. The testimonials represent a range of individuals from diverse backgrounds describing their first encounter with Israeli military courts, revealing shock at the discord between expectation and reality, the violence and humility embedded in the bureaucratized system, and the temporary and pseudo-structure of the courts and hearings themselves.