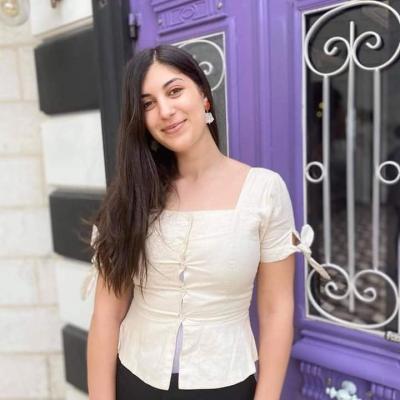 On 1 July 2020, the Israeli Occupying Forces raided Elyaa Abu Hijleh’s house in Al-Tira, demanding proof of identity, whereafter identifying her, the officer informed her that she would be taken to Ofer Prison. Elyaa was blindfolded with a medical mask, along with another mask placed over her nose and mouth, and transported in a military jeep to Ofer prison, where she was left on the floor of a room for an hour and a half. When she requested a chair to sit on, she was denied. Later, Elyaa was taken to a room near the watchtower where she stayed for four hours in the hot weather.

At Hasharon prison, Elyaa and other fellow female prisoners were threatened by an Israeli prison officer of being tied to their beds and placing them in a room with surveillance cameras. Elyaa was not allowed any change of clothes while at Hasharon, and she was also insulted and harassed by civilian prisoners who were in the same section.

Elyaa Abu Hijleh was brought before Ofer military court, which extended her detention. She was then presented with a list of charges related to her student and union work in Birzeit university, her responsibilities in the academic committee, belonging to an organization deemed unlawful under Israeli military orders and throwing stones.

During the court session, the military prosecutor stated that he accepted the deal for the imprisonment of Elyaa for 11 months on the basis of her short membership period with the organization, her clean past, and due to a “difficulty of evidence.” This “difficulty” refers to the torture of witnesses in Elyaa’s file, despite that the military prosecution does not mention the subject of torture at all, but rather claims “difficulty of evidence.”

The occupation authorities are expected to release Elyaa on 1 June 2021.

The Crime of Torture and “Difficulty of Evidence”

A number of Palestinian detainees were subjected to severe physical and psychological torture during an investigation occurring as part of a campaign of arrests that began in August 2019. Among the detainees were university students who were tortured and subsequently indicted with charges relating to their student and union activism within the university. It was through torture, pressure, and coercion that the Israeli interrogators illegally extracted confessions from Palestinian detainees and evidence used to prosecute, arrest, and convict other detainees, including Elyaa Abu Hijleh.

Moreover, the occupation authorities work complementary to each other to cover up crimes of torture committed against detainees in interrogation centers: beginning with prohibiting detainees from meeting with their lawyers, to preventing lawyers from monitoring and documenting torture, to concealing detainees’ statements about their exposure to torture from protocols during trial sessions (as was the case with prisoner Mais Abu Ghosh), to the point of not mentioning anything related to torture that was practiced related to the decisions of the military court ruling (as was the case with prisoners Khaled Qaad and Elyaa Abu Hijleh). In this vein, the military prosecution insists on the phrase “the existence of difficulty in the evidence” to refer to the fact that the statements of witnesses in the file of Elyaa were extracted illegally, but categorically rejects the explicit reference to torture in an attempt to evade the legal responsibility of Israeli interrogators who committed torture.

The prohibition of extracting confessions from detainees under torture is a legal principle enshrined in various legal systems and in international conventions. Under this principle, no person can be forced to make statements under duress, without their consent, and under torture; if these statements are extracted by unlawful means (ie torture), they are considered invalid and may not be used against the detainee or against another detainee.

The Fourth Geneva Convention affirms the imposition of criminal procedures against anyone who practices or orders torture or inhuman treatment, perpetrators of these crimes must be prosecuted and brought to trial.[1]The systematic practice by the Israeli occupation authorities, working complementarily across institutions, to conceal crimes of torture confirm that the military judicial system is part of the Israeli apartheid regime, leading to calls for an international trial on the violations and crimes of this system.

Elyaa’s Trial and the Principle of Non-Retroactivity

According to the principle of non-retroactivity (also known as the prohibition of ex post factolaws), new laws or legislation cannot be passed retroactively to criminalize actions that were legal when committed. Generally, international law prohibits the enactment of ex post facto laws, such provisions are found in Article 11(2) of the Universal Declaration of Human Rights, and Article 15(1) of the International Covenant on Civil and Political Rights.[2]Despite this legal principle, the occupation authorities continue to violate international legal principles to further extend their control over the Palestinian people.

The military court tried Elyaa for joining the Progressive Democratic Student Pole at Birzeit University, which was banned by the military commander on 13 August 2020, despite the fact that Elyaa was arrested a month and a half before this decree was issued. Moreover, her alleged activity with the student pole in the indictment was practiced before the announcement of the ban, indicating that Elyaa was tried in accordance with subsequent legislation, striking against the principle of non-retroactivity of laws, as the activities practiced by students within the framework of the student pole were not criminalized in and of themselves prior to this announcement. Rather, students were previously tried on charges of working within the framework of the student pole as a “student arm” of the banned Popular Front for the Liberation of Palestine, meaning the student pole had to be linked with the Popular Front in order for the detainee to be convicted. Now, with the latest decree banning the student pole itself, there is no longer a need to link the student pole with the Popular Front. Instead, belonging to the student pole becomes a crime for which students are tried before military courts, in flagrant violation of students right to student work, union, and political affiliation.

A Law Student Witnessing its Violation

Elyaa Abu Hijleh is the eldest daughter of a family of three. She is a law student in her final year at Birzeit University who excelled academically, maintaining honors since her enrollment in the university. The occupation deprived her and her family of the joy of graduating. Despite repeated attempts by her family to bring her university books to continue her studies, the prison administration continues to prevent this. Elyaa’s family, like those of other female prisoners, is cut off from communicating with her. Her mother has only visited her twice since her arrest, the last of which was over five months ago, due to the arbitrary occupation measures banning family visits under the pretext of the COVID-19 pandemic.

[1]Articles 146 and 147 of the Fourth Geneva Convention Relative to the Protection of Civilian Persons in Time of War, dated August 12, 1949. 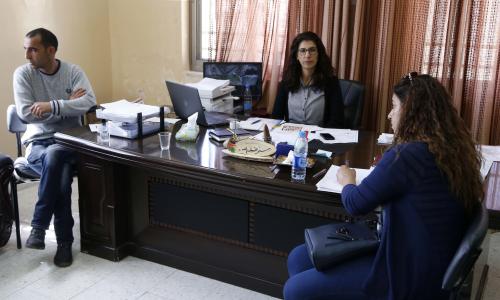 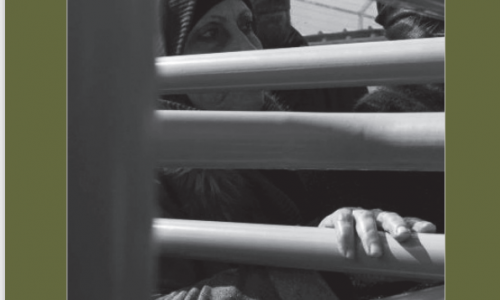