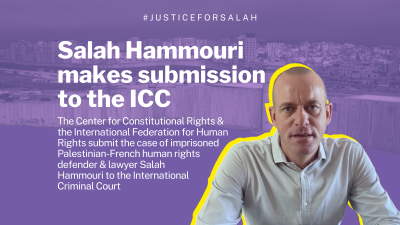 National, regional, and international civil society organizations,* welcome today’s communication submitted to the Office of the Prosecutor (OTP) of the International Criminal Court (ICC) on behalf of 37-year-old, Palestinian-French Jerusalemite, long-time human rights defender, and colleague lawyer, Salah Hammouri, which details years of persecution and new tactics to forcibly transfer Palestinians from occupied Jerusalem. The Center for Constitutional Rights and the International Federation for Human Rights (FIDH) submitted the communication on Mr. Hammouri’s behalf in the context of the OTP’s ongoing investigation into the Situation in the State of Palestine.

The communication, addressed to ICC prosecutor Karim A. A. Khan, sets out the prolonged persecution campaign perpetrated by the Israeli authorities targeting Mr. Hammouri since he was 15 years old, including intense harassment, repeated arbitrary detention, and the denial of his fundamental rights, including the right to family and family unity; freedom of movement; the freedom of association, assembly, expression and the right to protest; the right to pursue a livelihood; and the right to citizenship. The latest in this series of attacks was the revocation of his Jerusalem residency and placing him under administrative detention subject to indefinite renewals.

On 3 September 2020, Mr. Hammouri was notified of the Israeli Minister of Interior’s decision to revoke his permanent Jerusalem residency because of a “breach of allegiance” to the State of Israel, the Occupying Power, as stipulated under the amendment to the Entry into Israel Law. A year later, on 18 October 2021, his residency was indeed revoked, the basis of which is based on secret “information” undermining and fundamentally violating his right to due process and a fair trial. On 7 March 2022, about 25 Israeli Occupying Forces (IOF), arrested Mr. Hammouri from his apartment in Kufr Aqab north of Jerusalem. Two days later, he was placed under a three-month administrative detention on the basis of “secret information.”

The revocation of Mr. Hammouri’s residency and the denial of his fundamental rights because he is Palestinian constitutes a direct act of forcible transfer, which is a grave breach of the Fourth Geneva Convention and amounts to a war crime, as well as crimes against humanity of persecution and apartheid under the Rome Statute of the ICC.

“Salah’s case establishes a dangerous precedent for the Israeli Occupation’s escalation of residency revocation and administrative detention. The prolonged persecution Salah faces is a war crime and a crime against humanity under the Rome statute of the ICC,” said Sahar Francis, the General Director of Addameer Prisoner Support and Human Rights Association.

The communication explains that Israel’s attacks on Mr. Hammouri are part of a larger attack on Palestinian residents of Jerusalem in particular, and Palestinians living in occupied Palestine at large, including with regard to Israel’s policy of forcible transfer and persecution. The communication urges Prosecutor Khan to follow in the footsteps of his predecessor, Fatou Bensouda, who had formally issued statements in response to the two forcible transfer cases of Sheikh Jarrah and Khan al-Ahmar, as, since then, there has been no public statements from the OTP on the status of the investigation in the Situation in Palestine – or on the continued commission of crimes in the territory of Palestine, including in East Jerusalem. It further urges Prosecutor Khan to prioritize the Palestine investigation and proceed to the issuance of arrest warrants.

“Today, I stand at the most difficult crossroads of my life, from injury to detention, exile, detention without charge and more. The occupation doesn’t stop at killing, detaining, and displacing us,” said Salah Hammouri “I am with you today, and with your efforts, I hope my dream of continued living in my homeland won’t be killed” added Salah Hammouri.

The civil society coalition working for the “Justice for Salah” international campaign –that aims to end the Israeli settler-colonial regime’s persecution of Palestinian lawyer and human rights defender Salah Hammouri and raise awareness about the systematic and brutal policies against the Palestinian people– supports the demands presented in the communication to:

> Expedite the investigation in the Situation in Palestine and move swiftly towards bringing arrest warrants for concrete cases, amongst which must be one related to the crimes being committed against Palestinians in occupied and annexed East Jerusalem, including the violations against Mr. Hammouri.

> Warn the OTP of the cost of delay, silence and lack of any outward signs of progress in the OTP’s investigation, and continued impunity being paid daily – in the loss of Palestinian lives, and the denial of Palestinian safety and freedom.

> Call on the OTP to investigate the ongoing – and escalating – attacks on and forced displacement of Palestinians from East Jerusalem alongside the continued transfer of Israeli citizens into the Occupied Palestinian Territory (OPT), and focus on Israel’s coercive environment imposed to drive Palestinians out of Jerusalem, including through house demolitions, discriminatory planning and zoning policies, forced evictions, arbitrary detention, an elaborate permit system and residency revocation, of which Mr. Hammouri’s case is both a stark example and a warning of new tactics.

This communication was submitted in the context of the OTP’s investigation regarding the Situation in Palestine, initiated on 3 March 2021 after five years of preliminary examination. The investigation covers crimes within the jurisdiction of the Court that are alleged to have been committed in the Situation since 13 June 2014, the date to which reference is made in the Referral of the Situation to the OTP, extending to Gaza and the West Bank, including East Jerusalem.

Bisan Center for Research and Development

Center for Defense of Liberties and Civil Rights "Hurryyat"

The Palestinian Institute of Public Diplomacy-PIPD