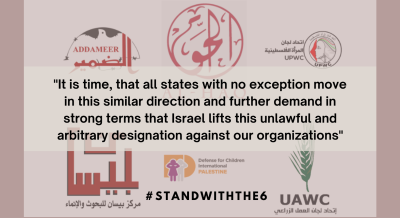 On July 18th, U.S Congresswoman Ayanna Pressley led a letter to U.S State Department, along with 21 of her Congress colleagues, urging Secretary of State Antony Blinken and Director of National Intelligence Avril Haines to publicly reject Israel’s decision against the six Palestinian CSOs, and further call on Israel to reverse its course. The letter emphasizes that “counter-terrorism legislation must not be applied to legitimate human rights and humanitarian activities,” further describing the criminalization of organization as a “repressive tactic” aimed at denying the fundamental right to freedom of association.

The U.S lawmakers acknowledged in their letter that such actions are part of Israel’s wider silencing and shrinking civic space campaign targeting Israeli, Palestinian, and international human rights and humanitarian organizations, resulting in a negative impact on their “ability to deliver assistance and advocate for human rights.” This is especially apparent following Israel’s Defense Ministry’s letters to three of the six organizations’ legal representatives demanding to obtain approval from the Israeli Finance and Defense Ministers for legally representing the designated organizations or expect to face criminal liability under Israel’s Counter-Terrorism laws. Notably, more than 130 local, national, and international groups and organizations support U.S Congresswoman Ayanna Pressley's letter.

Previously, on July 12th, the spokespersons of the Foreign Ministries of Belgium, Denmark, France, Germany, Ireland, Italy, Spain, Sweden, and The Netherlands issued a joint statement in support of the six prominent civil society and human rights organizations. The statement rejects Israel’s designation of the six organizations as “terrorist organizations” and states that “No substantial information was received from Israel that would justify reviewing our policy towards the six Palestinian NGOs on the basis of the Israeli decision to designate these NGOs as 'terrorist organizations.” The statement further reinstates that the nine EU member states will continue to cooperate and support Palestinian civil society, especially for their indispensable rule in promoting democratic values.

We consider such steps, although late, to be an important step towards the actualization of rescinding and revoking Israel’s settler-colonial and apartheid regime designation of our organizations. We further call on states to pressure Israel to dissolve its decision against the organizations, including the military order issued to outlaw our work in the occupied Palestinian territory (OPT).

It is time that all states, with no exception, move in this similar direction and further demand in strong terms that Israel lifts this unlawful and arbitrary designation against our organizations. The current response of the international community will prove to be the most imminent test of its resolve to protect Palestinian human rights and those advocating for them. We affirm our commitment to advocating and protecting the actualization of the dignity and rights of the Palestinian people in their struggle for freedom, justice, and the right to self-determination.