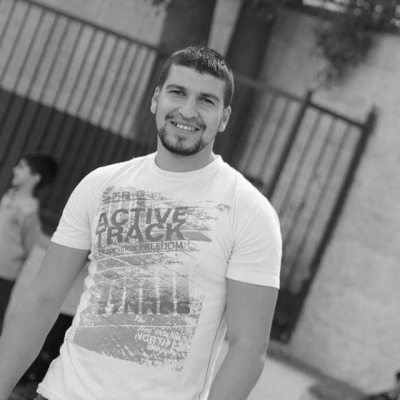 Khaled Farraj said to Addameer’s lawyer “Through my experience I cannot trust the military courts, for me I made my decision to go on a hunger strike as I cannot wait more than16 months. Either I get a substantial decision to release me or release me immediately.”

The occupation forces arrested Khaled Farraj on the 24 January 2018. He was transferred to interrogations, and he was heavily interrogated about his posts on his personal Facebook page. They gave him a list of charges which mainly included incitement through his posts on Facebook, alleging his posts were in support of “opposing organization”. The military prosecutor argued that Khaled’s posts had an impact on the opinion of the public in his area. Also, the list of charges claimed that his posts were symbolizing “opposing organization”, with the known fact the one of the  pictures was congratulating the release of his brother Adham from the occupation prisons. The list of charges highlighted the continuous violations against the freedom of speech and opinions and committed by occupation policies, which denies Palestinian basic rights that are protected by international conventions.

In the court hearing, the judge admitted that the three posts the list of charges mentioned were from a year before and “it is not understood why he was not arrested at that time”. The court said the results of the posts had little effects and not many people viewed his posts and this should minimize his indictment charges. The court also said that the standard for judging incitement was based on the nature and quantity of the posts. The court decided to release Khaled on 4000 shekels bail, and 6000 shekels fine. The military prosecutor filed an appeal to the court’s decision to release Khaled and requested for  his arrest until the day of the appeal session. On the day of the appeal session, the results were as expected, that the prosecutor could not prove the charges against the detainee, and thus ordered  administrative detention against him.

441 days in detention…without a charge or trial

The occupation authorities continue to use the policy of administrative detention as an alternative to a fair trial especially when it fails to direct or prove the charges against the detainee. This confirms the systematic nature of the violations committed by the Israeli occupation forces. The detention of persons on the bases of confidential material and information that the detainee or his lawyer cannot see constitutes a fundamental breach of the guarantees of a fair trial. The detainee does not have a choice to agree to these terms and it is his right to defend himself with a lawyer. Furthermore, the arbitrary detention lasts for long periods of time, subject to the discretion of the military commander on the intentions of the detainee and not on clear charges directed at him.

Khaled Faraj announced his hunger strike on 26 March 2019 in protest against his  continuous administrative detention orders. Since his strike, Khaled has only consumed water and salt. He suffered from stomach pain, dizziness and itching all over the body, and was not examined or followed up medically in the first week of the strike. Twenty-nine days after his strike, Khaled is in solitary confinement cells in the Negev prison, suffering from extreme exhaustion and inability to absorb water. He also began to vomit a yellow substance resulting from the lack of food entering the body.

As Khaled continued his open hunger strike, and after Khaled had completed 15 months in administrative detention, the lawyer of the Addameer filed a petition to the Supreme Court of the Occupation on Monday 22 April 2019, demanding the release of Khaled Farraj.

Khaled had already been on hunger strike in 2012 for 28 days, back then the hunger strike was not individual but rather it was collective one with several demands including ending the policy of arbitrary administrative detention.

The occupation prohibited Khaled from saying goodbye to his father:

It is the occupation’s policy to be vengeful against the prisoners. Besides, the arbitrary detention of Khalid lacks the minimum elements of a fair trial, the occupation authorities denied Khaled to farewell his father Jamal Farraj, who died last year, Khaled’s father's illness did not reach the sympathy of  the occupation authorities. His father also suffered from the oppression of the occupation, where he spent around 10 years in detention. He was deported outside Palestine during the first intifada, and he suffered from medical negligence in the Israeli prisons, where he lost one of his kidneys in solitary confinement, which later caused his suffering with the disease that caused his death.

“The hardest thing I cannot describe is that I was imprisoned at the time of my father's death, whom I have a close and special relationship with. From the beginning of my detention until now, there has been no reason to arrest me.”-Khaled Farraj in his court hearing