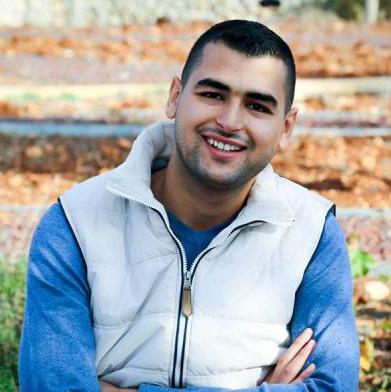 On 7 March 2018, at about 4 pm, the president of the student council at Birzeit University, Omar Kisswani, was arrested from campus where a group of people approached him claiming to be journalists. After conducting a fake press interview with him, the journalists turned out to be Israeli Soldiers disguised in civilian clothing. They suddenly exposed their weapons and pointed them at Omar and other students. The IOF attacked Omar and quickly shackled him.

During the arrest process, Omar was attacked, beaten, slapped and electrocuted with taser guns. The attack continued for 3 to 5 minutes by five soldiers who were also kicking him all over his body parts. The disguised unit arrested Omar and withdrew from campus under the protection of a group of Israeli soldiers who were riding a civilian vehicle. The Israeli soldiers continued to beat Omar inside the vehicle and kept cursing at him and insulting his family. The shackled his hands behind his back blindfolded him and forced his head against the vehicle’s floor.

This is Omar’s second arrest. His first arrest was in June 2015 where he received a one-year sentence and a suspended sentence for five years based on charges of affiliation with the Islamic bloc, which is considered an illegal movement by the Israeli occupation forces because of its claimed association with Hamas.

Furthermore, an Israeli special unit targeted Omar two weeks before his recent arrest. Where the unit waited for him in disguise at the university gate to arrest him. However, he was able to escape despite the fact that they fired gunshots at the vehicle that he was riding. They also went to his house in Beit Iksa village a number of times and arrested his mother, but he wasn’t there.

Omar Kisswani arrived at Moskobiyya interrogation center at around 10:00 pm. The name of the intelligence officer that followed up his file was “Foad”. Omar was transferred to a 2*2m cell after a short interrogation and reading him his rights. The cell included a mattress on the floor with a blanket and a hole in the ground as a toilet. The cell had a horrible smell and the AC was set at very low temperature.

During the first ten days of interrogation, the interrogator asked Omar about his personal information and threatened to detain his family members. The interrogator accused him of transferring money and belonging to an illegal organization.

Omar’s mother was arrested after a week of interrogation. When he knew that his mother was being interrogated as well, he was pressured to confess to the charges against him. At this point, the interrogation sessions became much longer denying him his right to sleep. As a result, Omar launched an open hunger strike in protest of the conditions he was forced to live. The hunger strike lasted for 13 days.

Omar’s hands were shackled to the chair behind his back during all of the interrogation sessions. Each session lasted for 20 continuous hours without any breaks which caused Omar severe back and joints pain. Omar was also banned from seeing a lawyer until 26 March 2018. After the interrogation ended, he was transferred to Ofer prison near Ramallah.

Arresting his mother during interrogation

The Israeli Occupation Forces pressured Omar by arresting his mother and bringing her to Moskobiyyeh interrogation center on 14/3/2018, a week after he son’s arrest.

Omar’s mother says, “one week after my son’s arrest, I received a call from a man who identified himself as an intelligence officer from Moskobiyyeh interrogation center, he told me that I need to go to the center the next morning. On 15/3/2018, I went to moskobiyyeh interrogation center where I was held in the waiting room for about an hour. Later, they took me to another room where they made me pass through a metal detector, checked my ID card and then took me to an interrogation office. An interrogator was present and started asking me general questions about my family, the names of my sons and husband.”

His mother adds, “Afterwards, the interrogator started asking me about my son Omar, and threatened to have him spend a very long time in prison. He told me that I didn’t raise him well and that he is a dangerous man and his actions are dangerous as well and this is why he will spend a long time in prison and that there is no hope of releasing him.”

A police officer came to take a statement from Omar’s mother and requested her to sign a paper with statements that she did not make during the interrogation. She refused to sign, and the interrogator started yelling at her telling her that she has to sign the statement. After two and a half hours of interrogation, she was released.

Palestinian prisoners and detainees are subjected to torture and ill-treatment from the moment of the arrest, whether soldiers forcibly enter their homes in pre-dawn raids to arrest them, or at military checkpoints, from public streets, or at borders upon travel. While times and places may differ with regards to the arrest of the Palestinian detainees, the policy of physical assaults against the detainees is systematic and practiced in a widespread manner, regardless of age, gender, or health conditions.

These policies are in direct contravention of international law, including Article 2(1) of the United Nations Convention against Torture (CAT), ratified by Israel on 3 October 1991, which requires any State Party to prevent the use of torture and associated practices.

The right to be free from torture is a fundamental and non-derogable right, guaranteed to all human beings, regardless of detention status. As a state-party to the most essential conventions and treaties protecting this right, including the Universal Declaration of Human Rights, the International Covenant on Civil and Political Rights and especially, the United Nations Convention Against Torture,(1) Israel is under unquestionable international legal obligation to ensure that all prisoners are free from torture, and cruel, inhuman and degrading treatment or punishment.